Company will trial new greener cups in several markets worldwide in the coming year, roll out new strawless lids in the U.S. and Canada, and provide customers an opportunity to digitally trace their coffee’s journey from seed to cup

SEATTLE – Sipping your hot coffee from a paper cup that you can recycle or compost in your community. Enjoying a cold coffee beverage with a recyclable, strawless lid instead of a conventional plastic straw. And checking the Starbucks mobile app to see the journey of your packaged coffee beans as they were grown, processed, traded and roasted.

Starbucks leadership will unveil progress and plans on all these fronts at the company’s annual meeting of shareholders, noting that sustainable coffee, served sustainably is an area of particular passion for Starbucks and its more than 380,000 partners (employees) around the world.

“It was at our shareholders meeting one year ago that we launched multi-year initiatives around greener cups and digitally traceable coffee,” said Kevin Johnson, president and ceo of Starbucks. “Today thanks to many valuable collaborations, we’re seeing significant, tangible progress toward a greener future.”

Over the next year in several markets worldwide, the company will trial new, greener cups. Shareholders will hear the news today as they sip coffee from one of the cup technologies that will be trialed. Starbucks customers in New York, San Francisco, Seattle, Vancouver and London will help test a few different cups that will be both recyclable and compostable in those municipalities’ facilities. Starbucks will choose the cup technologies from NextGen Cup Challenge winners announced earlier this month, working with expertise and support from the NextGen Consortium.

Starbucks initiated the Consortium last spring with Closed Loop Partners, and its mission includes identifying cup technologies that can be both recyclable and compostable on a global scale. In addition, the Consortium aims to leverage the scale of its powerful members and industry experts – which a year later include not only Starbucks but also another founding partner McDonald’s, along with supporting partners The Coca-Cola Company, Nestlé, Yum! Brands, Wendy’s and advisory partner the World Wildlife Fund – to work with municipalities to increase acceptance of these new paper cups in recycling and composting programs by showing their value and ability to be recovered and diverted from landfills.

The Consortium’s work supports Starbucks many efforts to minimize its environmental footprint, which include a goal made in 2016 to double the recycled content, recyclability and the reusability of its cups by 2022.

“It is with great intention that we move forward with highly collaborative and innovative work to bring both recyclable and compostable cups to scale around the world,” Johnson said. “We are reimagining the future for Starbucks, and for the more than 30,000 communities we serve each day, with a great sense of responsibility for a more sustainable planet.”

“We applaud Starbucks speed in committing to test NextGen winners that were identified less than a month ago, and the innovative collaboration at work here among so many global food and beverage companies,” said Kate Daly, Executive Director of the Center for the Circular Economy at Closed Loop Partners. “We look forward to continuing to build on this momentum, so that we can help recyclable and compostable options be the norm rather than the exception for to-go cups.”

Starbucks will roll out new lightweight, recyclable strawless lids to all stores in the United States and Canada in the next year. This is a key milestone as the company works to phase out plastic straws from its more than 30,000 stores worldwide by 2020, eliminating more than 1 billion straws a year – a goal that was announced last July.

Newly redesigned, lightweight recyclable strawless lids will roll out this summer to Starbucks locations in Los Angeles, San Francisco, Seattle, Washington, D.C., Indianapolis and Toronto, while the rest of the U.S. and Canada will receive them by early 2020.

The new lids have 9% less plastic than the current lid and straw. Frappuccino® drinks and other blended beverages will continue to have a different, domed lid made from recyclable plastic and will be accompanied by a straw, except where local law prohibits it. Starbucks is testing alternative material straws for blended beverages and is exploring some of this month’s winning NextGen technologies that could apply to straws. (Plastic straws will continue to be available upon request for Starbucks customers who need or request them.)

“We are pleased to see Starbucks exploring more ways to reduce its overall plastic footprint less than a year after first announcing its decision to phase out plastic straws,” said Susan Ruffo, managing director for international initiatives at Ocean Conservancy. “Redesigning products and packaging to be more sustainable is a long-term commitment, not a one-time decision, and Starbucks is clearly in for the long haul. We look forward to seeing how the company continues to do its part to fight ocean plastic and we hope others follow suit.”

“Starbucks is invested in developing solutions that seek to improve the sustainability of their products,” said Erin Simon, Director of Sustainability R&D at World Wildlife Fund. “When companies begin to rethink their plastic footprint, innovation, research and measurement are the key elements needed to set them on a path toward continuous improvement.”

Starbucks will preview a feature for the Starbucks mobile app that shows its coffee beans’ journey from bean to cup. Senior vice president of Global Coffee & Tea Michelle Burns will unveil for shareholders a future feature for the Starbucks mobile app. The reveal will accompany an on-stage tasting of digitally traceable Starbucks Pike Place® Roast, the package of which, in the future app feature, can be scanned to see its journey  from origin to the package.

As the audience will sip their Pike Place from one of the new greener cups the company will trial, they’ll learn that 80% of their cup’s coffee beans came from Colombia and 20% came from Brazil. They’ll see the beans are verified as 100% ethically and sustainably sourced; information about Starbucks responsible sourcing standards and open-source Farmer Support Center in Colombia; where the beans were roasted, (in Kent, Wash.); and brewing tips for a perfect cup.

Now one year into a two-year project to explore the benefits of digital traceability, Burns emphasizes Starbucks ambition of greater empowerment for coffee farmers as customers better understand where their coffee comes from and who grows it. Eventually, customers will be able to use the Starbucks mobile app to trace the journey of their Starbucks packaged coffee.

“We’re thrilled to be working with Starbucks and its suppliers on engaging coffee farmers in real, two-way dialogue on this topic,” said Bambi Semroc, Vice President of Sustainable Markets and Strategy for Conservation International, which is conducting farmer interviews in Costa Rica, Rwanda and Colombia for the project. “We are innovating to help connect coffee drinkers with coffee communities, with the goal to return more value to farmers by first listening to their stories, their knowledge and their needs.”

Costa Rican Coffee Institute (ICAFE) has also been focused on the importance of access to information in coffee farming communities. Xinia Chaves, Executive Director of ICAFE said, “We’ve learned in the past year that collecting and communicating transparent information throughout the entire coffee value chain of Café de Costa Rica has an enormous impact for all the actors that take part in it.” 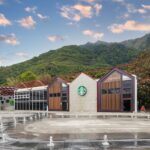 Reinforcing its commitment to sustainability, all Starbucks Taiwan stores will offer reusable cup options to customers by 2023

A coffee newbie turned Regional Barista Champion; a barista who became a district manager; a regional latte art coach who shares her love of coffee; and a Regional Coffee Stories Champion who now shares her coffee knowledge online: meet four Starbucks partners reaching new heights through their passion for coffee. Yong: A love for coffee […]

More than 20 EV chargers are now installed at 17 stores across Klang Valley, Penang, Johor and Malacca On October 18th, Starbucks Malaysia, in partnership with Yinson GreenTech, unveiled the first of its electric vehicle (EV) charging station, powered by chargEV, at the Starbucks Eco Grandeur in Puncak Alam, Selangor, Malaysia. Over the next three […]